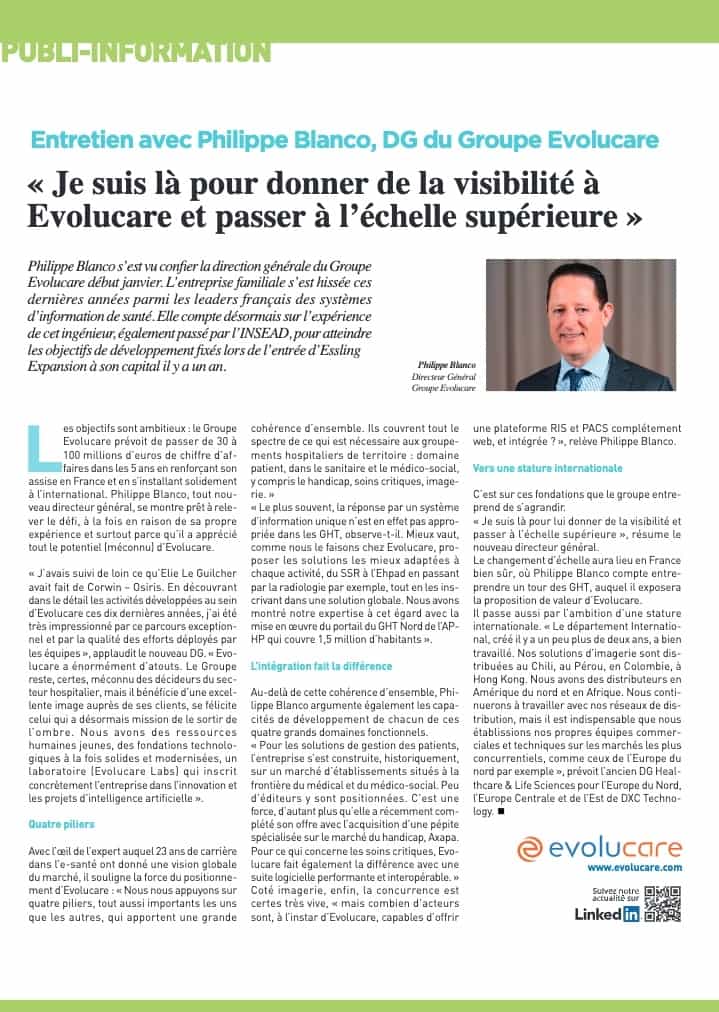 Philippe Blanco was appointed CEO of Evolucare Group in early January. The family business has climbed to the top of leading French healthcare IT over the past few years. It is now bolstered by the experience of this engineer, a graduate of the business school INSEAD, to reach the development objectives set when Essling Expansion invested one year ago.

The objectives are ambitious: Evolucare Group plans to grow revenue from 30 to 100 million euros within five years by strengthening its foundation in France and expanding worldwide. Philippe Blanco, the brand-new CEO, is ready to face the challenge thanks to his own experience and, above all, thanks to Evolucare’s (untapped) potential which he has well estimated.

“I was following what Elie Le Guilcher did with Corwin – Osiris. Learning in detail about the business developed at Evolucare over the past ten years, I was very impressed by this exceptional journey and the quality of the teams’ efforts,” applaudes the new CEO.
“Evolucare has many assets. The Group is admittedly little-known to policymakers in the hospital industry, but it has an excellent reputation among its clients,” admires the man whose mission is to bring it into the spotlight. We have young human resources, solid and modern technological foundations, a laboratory (Evolucare Labs) which is bringing innovation and artificial intelligence projects to the company.”

With an expert eye and global vision of the market thanks to a 23-year career in e-health, he underlines Evolucare’s strong position: “We are based on four pillars, each one as important as the next, which provide significant group cohesion. They cover the entire spectrum of what regional hospital groups need: patient care, in the healthcare and medico-social fields, including disabilities, critical care, imaging.”

“Most often, a response from a single information system is not suitable for regional hospital groups,” he observes. It’s better, as we do at Evolucare, to suggest solutions that are best-suited to each activity, in rehabilitation, nursing homes and radiology, for example, while aligning them with a global solution. We have demonstrated our expertise in this area with the launch of the portal for northern regional hospital group at AP-HP, which covers 1.5 million residents.”

The difference is in integration

Beyond this group cohesiveness, Philippe Blanco also makes a case for the development capacities of each of these four functional areas.

“For patient management solutions, the company was built, historically, in a market of establishments at the frontier of the medical and medicosocial fields. Few publishers were in this position. This is a strength, all the more so because it recently expanded its package with the acquisition of a company specialized in the disability market, Axapa. Regarding critical care, Evolucare is also making a difference with a high-performance, interoperable software suite.” Finally, in imaging, competition is intense, “but how many are, following the example of Evolucare, able to offer a RIS-PACS platform that is fully web-based and integrated?” asks Philippe Blanco.

The group is undertaking an expansion on the basis of these foundations.

“I am here to give it visibility and scale up,” summarizes the new CEO.

The change in scale will take place in France, naturally, where Philippe Blanco plans to tour the regional hospital groups and present the Evolucare value proposition to them.

He also has the ambition of international prominence. “The International business unit, created a little over two years ago, has been working hard. Our imaging solutions are distributed in Chile, Peru, Colombia and Hong Kong. We have distributors in North America and Africa. We are continuing to work with our distribution networks, but it is essential that we establish our own business and technical teams in the most competitive markets, such as those in Northern Europe, for example,” said the former CEO of Healthcare & Life Sciences for Northern, Central and Eastern Europe at DXC Technology.