How the Evolucare group aims to champion e-health 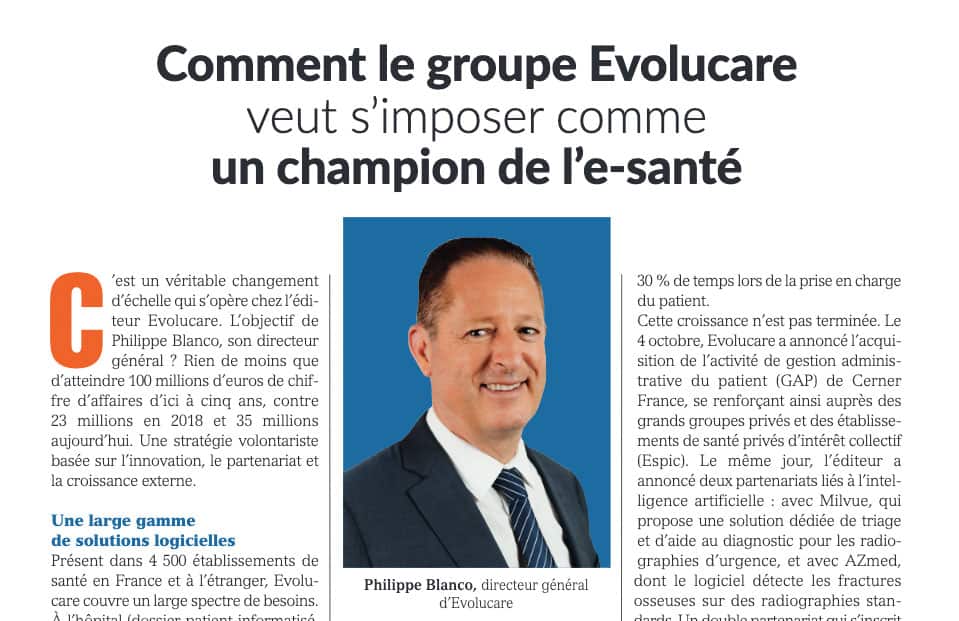 The Evolucare group, an expert in IT systems for the healthcare industry, is experiencing a period of strong growth. With Essling Expansion acquiring a stake in its capital and the arrival of Philippe Blanco as the CEO, the group aims to triple its turnover in the next five years with a dual strategy of innovation and external growth.

The publisher Evolucare really is taking things to the next level. The goal Philippe Blanco, its CEO, has in his sights is no less than 100 million euros of turnover in five years of time, as compared to 23 million in 2018 and 35 million today. This proactive strategy is based on innovation, partnership and external growth.

A wide range of software solutions

Evolucare solutions are used in 4,500 healthcare facilities in France and abroad, covering a broad spectrum of needs. These range from hospitals (electronic patient records, administrative and medical needs, treatment records, management of operating theaters, anesthesia and intensive care, etc.) to medico-social establishments with its user and resident records and medical imagery thanks to its innovative fully integrated RIS/PACS solution.

Major investments in R&D have also enabled Evolucare to keep pace with the challenges of the “Ségur de la Santé”, particularly with regard to interoperability. The “Ma santé 2022” program is fully reflected in the group’s strategy, based on a “continuum of care” between the healthcare and medico-social sectors.

The publisher now wants to go further by including its solutions in an approach based on digital service packages. The ePortal/eLink solution, a digital services platform deployed in an area of Île-de-France, satisfies the challenges of the “Ségur de la Santé” by grouping the stakeholders of the various treatment chains into circles of care.

Growth through take-overs and partnerships

In addition to its commitment to innovation, Evolucare is counting on its external growth to extend its activity. The acquisition by Essling Expansion of shares in its capital in early 2019 immediately resulted in an investment of 26 million euros for the development of its medical software and the acquisition of the Imago DU solution, intended for the treatment of people with disabilities.

In 2020, the group then acquired the medical imagery specialist Actibase, followed by MedgicGroup, which has developed an SaaS solution for the care of nursing home residents. More recently, in July 2021, Evolucare began providing chatbots for its customers after the signature of a white label contract with the start-up BOTdesign. For example, its pre-anesthetic consultation bot can automatically complete the Société Française d’Anesthésie et de Réanimation (Sfar) document and enable surgical teams to save up to 30% of time in patient treatment.

This growth is not over yet. On October 4, Evolucare announced the acquisition of Cerner France’s Patient Administrative Management activity, thus strengthening its standing with the major private groups and private health institutions of public interest (Espic). On the same day, the publisher announced two partnerships linked to artificial intelligence, with Milvue which offers a dedicated triage and diagnostic support solution for emergency X-rays, and with AZmed, whose software detects bone lesions and fractures on standard X-rays. This dual partnership follows on from the investments already made in AI: Evolucare, along with the Inserm and the AP-HP (the organization bringing together the public hospitals of Paris), developed the OphtAI solution which provides ophthalmologists with digital support for the detection of pathologies based on fundus images. This breakthrough technology is a symbol of the transformation in which the Evolucare is now engaged in France and abroad. The group is also on the point of announcing the acquisition of a company in Germany… 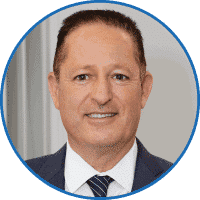 Philippe Blanco, 20 years of experience in IT for the healthcare industry
Philippe Blanco joined the Evolucare group as its CEO in January 2020. This engineer, who is also a graduate of the business school INSEAD, was Agfa HealthCare France CEO for six years, the branch of Agfa dedicated to medical imagery and IT for the healthcare sector. He then became Healthcare & Life Sciences General Manager for Northern, Central and Eastern Europe at DXC Technology, for which he developed the Health activity based on new-generation technologies.