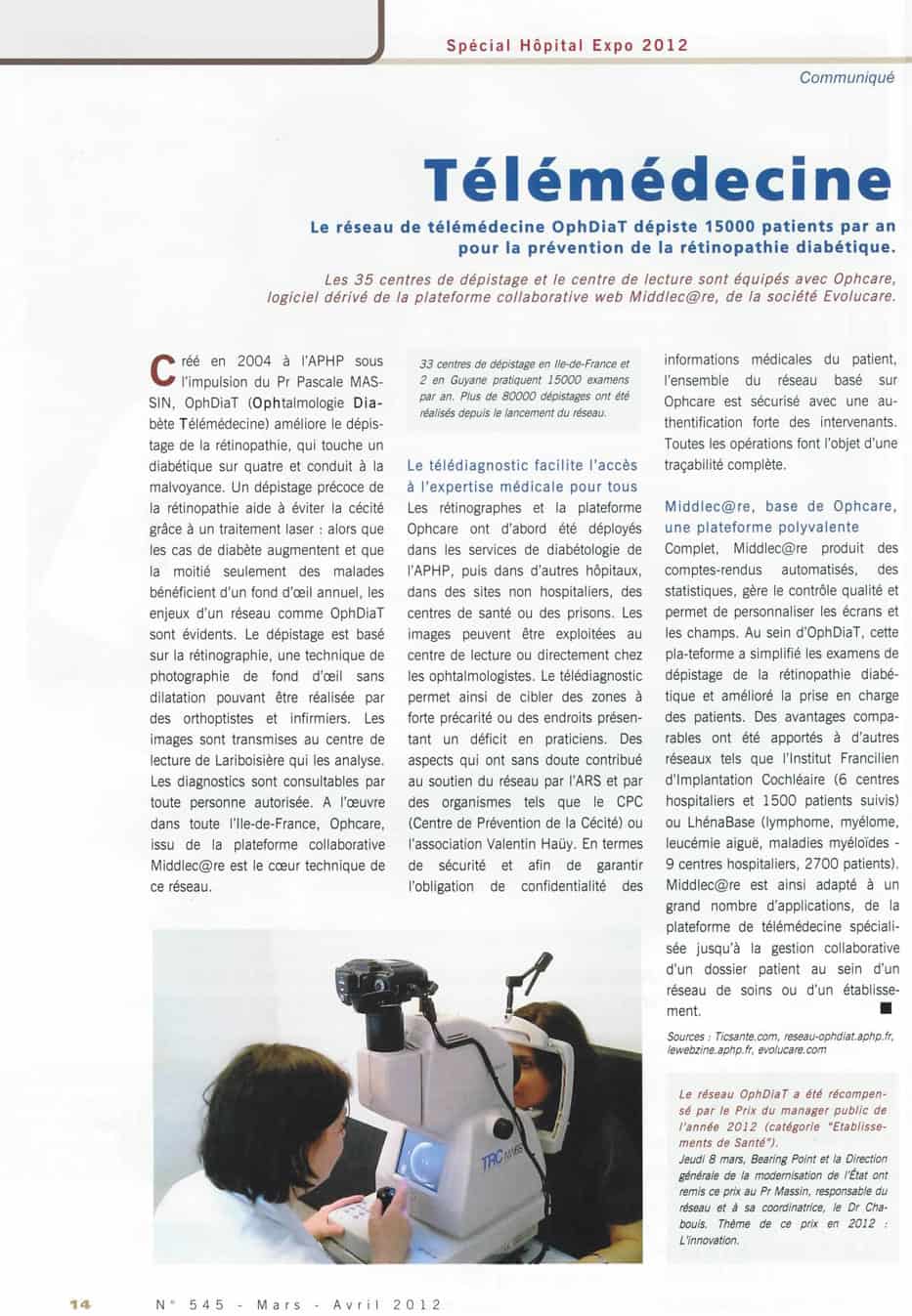 The 35 screening centers and the reading center are equipped with Ophcare, software derived from Evolucare’s Middlec@re collaborative web platform.

Created in 2004 at APHP (Paris hospital network) under the leadership of Prof. Pascale MASSIN, OphDiaT (Ophthalmology Diabetes Telemedicine) improves screening for retinopathy, which affects one in four diabetics and leads to low vision. Early retinopathy detection helps to avoid blindness by using laser treatment. While the number of cases of diabetes is increasing and only half of the patients undergo an annual dilated fundus examination, the challenges of a network like OphDiaT are obvious. Screening is based on retinography, a non-dilated fundus photography technique that can be performed by orthoptists and nurses. The images are sent to the Lariboisière reading center, which analyzes them. The diagnostics can be viewed by any authorized person. Ophcare, which was created from the Middlec@re collaborative platform and is used throughout Paris region, is the technical core of this network.

Remote diagnosis facilitates access to medical expertise for all

The fundus cameras and the Ophcare platform were first used in the APHP’s Diabetology Department, then in other hospitals, at non-hospital sites, health centers and prisons. The images can be used at the reading center or directly at ophthalmologists’ offices. Remote diagnosis can thus be used to target disadvantaged areas or places with a lack of practitioners. These aspects undoubtedly contributed to the support of the network by the ARS (Regional Health Agency) and by organizations such as the CPC (Center for Blindness Prevention) or the Valentin Haüy association. In terms of security and in order to ensure the confidentiality of patient medical information, the entire Ophcare-based network is secured with strong authentication of participants. All operations are fully traceable.

Middlec@re, a versatile platform that is the core of Ophcare

Middlec@re is a complete platform that produces automated reports, statistics, manages quality control and allows customization of screens and fields. Within OphDiaT, this platform has simplified screening tests for diabetic retinopathy and improved patient care. Comparable advantages have been provided to other networks, such as the Institut Francilien d’Implantation Cochléaire (with 6 hospitals and 1,500 patients followed) or LhénaBase (for lymphoma, myeloma, acute leukemia, myeloid disorders—with 9 hospitals and 2,700 patients). Middlec@re is thus suitable for a large number of applications, from its use as a specialized telemedicine platform to collaborative patient file management in a health care network or establishment.

In late 2008, a DHOS (Office of Hospitalization and Health Care Organization) report indicated that most telemedicine applications were not yet operational. So OphDiaT, which has been in use since 2004, was a pioneering network. What factors or circumstances led to this head start?

Dr. Erginay: Since the 1980s, several countries in Northern Europe and the US have set up screening networks for diabetic retinopathy. After following the work carried out by these networks and noting that there was a similar need in France, Prof. Pascale MASSIN, the head of Ophthalmology Department at the APHP, decided to launch this project in 2002. The first pilot studies took place at the Bichat Hospital, in Prof. MARRE’s department. With the use of this network, we went from a two- to three-month process for having an ophthalmology consultation to an overall 48-hour process for most patients screened by OphDiaT.

Telemedicine was first regulated in August, 2004. How were the legal aspects taken into account in the framework of the project?

Dr. Erginay: Overall, the computer system was already equipped with the required security and encryption mechanisms. In addition, we were able to configure the software or have changes made when it was necessary, for example, to take into account the management of double readings of images, or for obtaining and recording patient consent.

Both the DHOS and the association board insist on the need for strict procedures in telemedicine. How does OphDiaT ensure an appropriate level of quality and security?

Dr. Erginay: In France, orthoptists and trained nurses capture the images, in accordance with the law. As a result, less than 10% of the images are uninterpretable, part of which is related to the patient’s eye, for example due to a cataract. Operators who produce too many uninterpretable images receive additional training. The images are always interpreted by ophthalmologists, unlike in some countries, where disputes arise. In addition, we perform a double reading of 5% of the images for quality control. We would like to see this rate increase, but it’s limited by our workforce. The level of consistency of these double readings was more than 94% in 2011.

After eight years, what conclusions can be drawn from the implementation of OphDiaT, compared to the initial expectations?

Dr. Erginay: They have been largely met. Nearly 15,000 screenings were carried out in 2011. Of these screenings, 75% did not indicate diabetic retinopathy and, therefore, were not followed by an ophthalmology consultation. This has led to significant savings in specialists’ time and health care costs. Better screening means better prevention of serious disorders like blindness. Both on an economic and human level, the benefits are incalculable. OphDiaT also received a prize that was recently awarded to Prof. MASSIN and Dr. CHABOUIS, the network coordinator [see opposite].

According to the DHOS, the expansion of OphDiaT is facing funding issues, despite a positive opinion from the HAS (French Health Authority)…

Dr. Erginay: There is a consensus on the benefits of the network, but we are specifically limited by the lack of reimbursement by the social security system of remote diagnostic procedures by telemedicine. This is an economic barrier that prevents us from using more ophthalmologists to read the images and thus increasing the number of patients screened remotely, in the same quality conditions and within the same time periods (98% of results are returned within 48 hours). Clarification should also be provided regarding the liability of practitioners in telemedicine. Once these obstacles are removed, we’ll be able to screen more patients. We now have two screening centers in French Guiana. The OphDiaT network has no geographical limits!

What is your overall assessment of Ophcare, the IT tool at the core of OphDiaT, based on Middlec@re software?

Dr. Erginay: It’s a high-quality tool and the Evolucare team is very responsive when we encounter a problem. We point out the changes we need and a new upgraded version is provided about every two years.