The rapid deployment of OpRoom at the Institut Mutualiste Montsouris 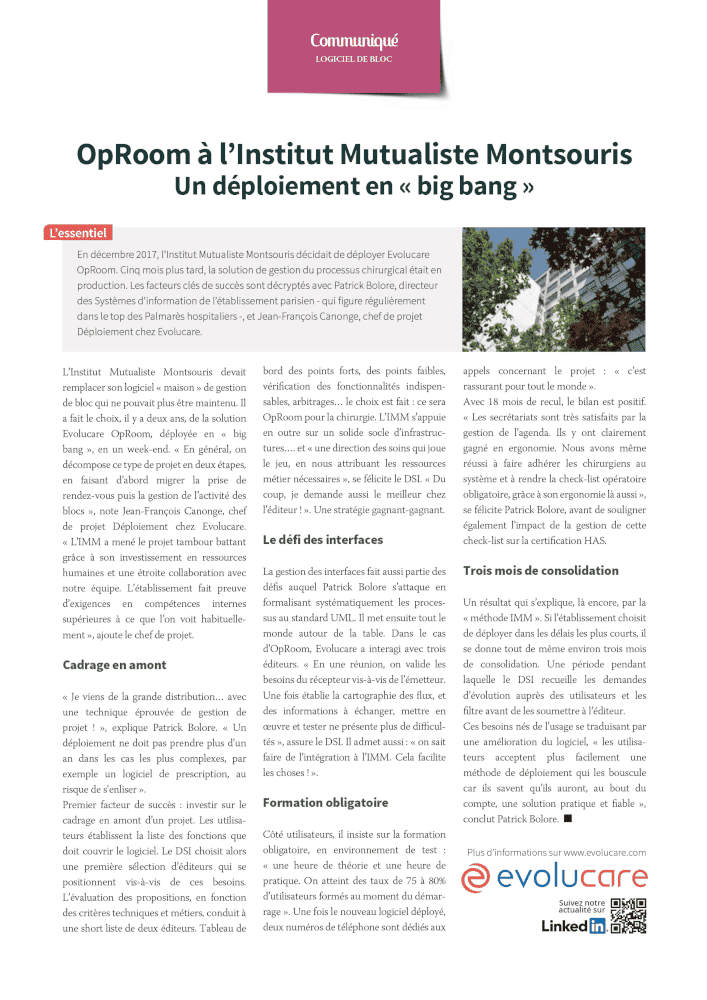 The Institut Mutualiste Montsouris needed to replace its internal OR management software, which could no longer be maintained. Two years ago, it chose the Evolucare OpRoom solution, which was rapidly put in place over a single weekend. “In general, we divide this type of project into two stages, first migrating the appointments then OR management,” noted Jean-François Canonge, Deployment Project Manager at Evolucare. “The IMM was able to carry out the project swiftly, thanks to its investment in human resources and close collaboration with our team. The establishment has greater internal skills requirements than most institutions,” added the Project Manager.

“I’ve worked with large retailers, with a proven project management technique!” explains Patrick Boloré. “Deployment shouldn’t take more than a year in the most complex cases, such as with prescription software; otherwise, you risk getting stuck.” The first success factor is investing in the preparatory phase of the project. Users make a list of functions that the software needs to provide. The CIO then makes a first selection of publishers who address these needs. The evaluation of proposals, based on technical and industry criteria, results in a short list of two publishers. After preparing a dashboard of strengths and weaknesses, checking essential functions and carrying out consultations, OpRoom was chosen for surgery.

The IMM is also supported by a solid base of infrastructures and “a health care department that cooperates by allocating the necessary resources to us,” says the CIO. “So I also demand the best from the publisher! ” A win-win strategy.

Managing interfaces is another one of the challenges that Patrick Boloré is addressing by systematically formalizing processes according to the UML standard. He brings everyone to the table. For OpRoom, Evolucare interacted with three publishers. “At a meeting, we validate the needs of the receiver vis-à-vis the transmitter. Once the flow maps have been established, as well as the information to be exchanged, there are no more difficulties involved in implementation and testing,” says the CIO. He also admits that “IMM knows how to integrate systems. That makes things easier!”

When it comes to users, he insists on mandatory training in a test environment: “One hour of theory and one hour of practice. We reach rates of 75 to 80% of users trained at go live.” Once the new software has been deployed, two telephone numbers are available for calls concerning the project. “It’s reassuring for everyone,” he says. After 18 months, the results have been positive. “The administrative offices are very satisfied with the schedule management. The new solution is clearly more user-friendly. We even managed to get surgeons on board and make the surgical checklist mandatory, also thanks to its user-friendliness,” says Patrick Boloré, while stressing the impact of managing this checklist regarding HAS (French Health Authority) certification.

This result can also be explained by the “IMM method.” While the establishment chose to deploy the solution in the shortest possible time period, it still planned for about three months of consolidation. During this period, the CIO received requests for changes from users and filtered them before submitting them to the publisher. These needs arising from use result in an improvement of the software and “users are more willing to accept a deployment method that requires changes because they know that they will end up with a practical and reliable solution,” concludes Patrick Boloré.

← Evolucare, the expert for health information systems Smart Angel, a ‘virtual nurse’ tailored to each patient →